A young American designer claims that Converse stole her designs for their popular Chucks model. She applied for an internship two years ago and submitted the designs for it. The company denies.

Cecilia Monge, a young Florida designer, claims Converse stole her designs for a collection of the popular "Chuck Taylor All Stars" model, also known as "Chucks". The 22-year-old says she applied for an internship at the company two years ago and was asked to submit some designs based on the color scheme of US national parks.

Current trends Men's fashion in Corona times: when the supermarket becomes a catwalk

Now Converse brought out a "National Parks" collection that has a similar color concept. The designer does not consider this a coincidence and went public on the advice of the family. Several US media have already reported on this and published statements from Converse denying the allegations.

Discovered the collection on TikTok

Monge discovered Converse's "National Parks" collection on TikTok. Because: The models are currently only available in the Australian online shop of the Nike subsidiary. According to her own statements, she was initially skeptical that such a large company could copy a small designer like her, but friends and family confirmed her belief that she had been robbed. She decided to write to Converse and hold her accountable, but there was no response from the company. After she published a video herself in which she compared her pitch from 2019 and the newly released collection, various US media became aware of the young designers.

The Diet Prada Instagram account, which exposes design copies and other inconsistencies in the fashion industry, also addressed the issue. The operators Tony Liu and Lindsey Schuyler fight against racism, sexism and other injustices in the fashion industry and have been instrumental in clarifying such incidents in the past. The comments under the relevant post and also previous posts show why: Unfortunately, it is not uncommon in the industry for large companies to ask their applicants for work samples so that they can then use them in their collections. 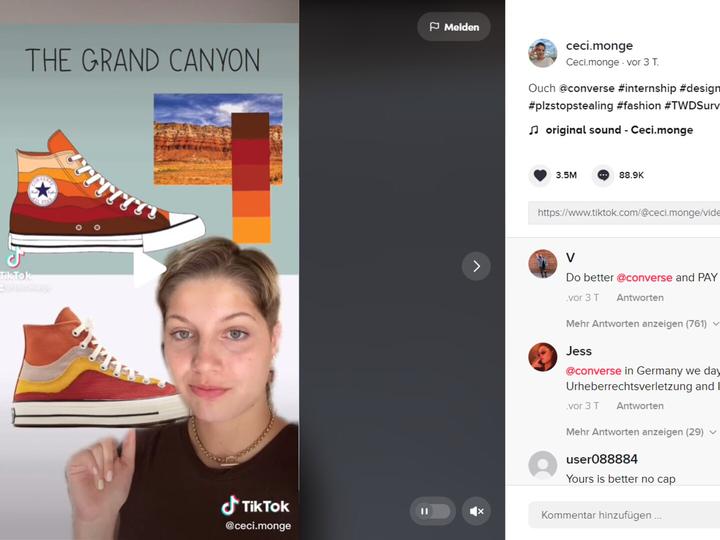 After several US media and also "Diet Prada" demanded a statement, Converse finally commented on the incident: "In November 2019, the candidate applied for the summer program 2020 - a highly competitive program for which thousands of applications are received every year She was not hired or invited for an interview. The application did not include a request for design portfolios/samples, nor was she asked to do so by Converse. For legal reasons, we do not share unsolicited portfolios from applicants within the company," he said the company told the New York Post.

Here you can change the settings for the providers whose content you want to display. These providers may set cookies and collect information about your browser and other criteria determined by the respective provider. Further information can be found in the data protection information.

In her video, Monge admits that she was never asked to submit designs, but wanted to stand out with her application because she was dying to get the job. In another video, she shows the data on her computer, which is intended to prove that the said PDF was created in November 2019 and has not been changed since then. Converse, on the other hand, claims that the predecessor of the "National Parks" collection was a "Chuck 70" shoe from October 2020, which would have been designed in April 2019.

There was also a similar incident in Germany in the summer of 2020, in which an applicant accused the advertising agency Scholz & Friends of stealing ideas. She was asked to design a campaign for The Female Company as part of her application. After the agency turned her down, the young woman saw half a year later how her campaign was implemented without her and with great media impact. Scholz & Friends rejected the allegations, The Female Company apologized publicly for the incident.