And suddenly everything was colorful.The Facebook profile photos, the Instagram channels and even the homepage of Google shone red, orange, yellow, green, blue and violet.The rainbow flag, the famous gay-lesbian symbol, wallpapered the Internet on Friday morning after the Bundestag had given its go for the complete equality of homosexual couples.The most popular hashtags: #wife, #heuteisteIngutertag, #weshiarrrivedinthe21stcency.

No question, this is a reason for many to celebrate.If you want, you can now express your joy about the historical decision analogously.Primarily with sneakers. 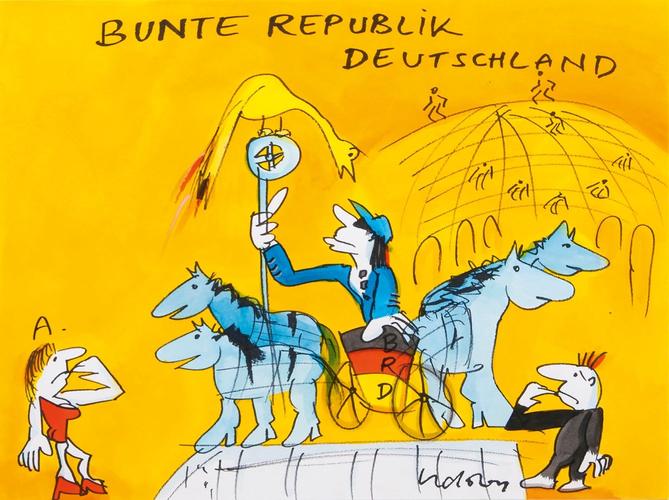 The fact that men and women will soon be able to marry men in Germany is a happy coincidence for some fashion companies, because now there is rarely a good purchase event for their products in this country.They have officially marketed them under the motto "Pride" (pride), the term that marks the open and self-confident handling of sexual identity in the lesbian and gay movement.The "Gay Prides" is often referred to as the street parades, events and demonstrations for the rights of homosexuals taking place in June and July.In preparation for such an event, the "Gay Freedom Day", the ex-soldier and artist Gilbert Baker invented the rainbow flag in San Francisco in the late 1970s.

Anyone who confessed to their homosexuality at the time proved courage.Because he was often discriminated against by others and had to expect hostility or violence.Most heteros, politicians or even fashion companies would therefore never have given themselves with a rainbow "Pro Homo".In 2017, on the other hand, they like to write the six colors on their flags or shoes.They have become a kind of stylistic device, but as a homosexual person you wonder whether everyone who attracts such a trendy rainbow shoe is thinking about what it is like to be beaten or spit on the street because of his sexual attitude.This can still happen in Germany today.

The fact that fashion companies are currently positioning themselves with the rainbow flag also has something to do with politics: Some of them have already had small extra collections in the past in the "LGBT Pride Month" (for gays, lesbians, BI- and transsexual) sold.Every year in June, Obama has participated in celebrations in favor of the community since then, gave receptions in the White House, and model labels gave the revenues of their rainbow pieces to be charitable purposes.Obama's successor Donald Trump has now abolished the Pride-Month.

The fact that as many labels like never before rainbows are printing on their products and are beneficial is also allowed to be understood as a statement.Also for the fashion industry itself. Many homosexual people work there, you know and that has always been the case.Publicly known or is committed to corresponding topics, but a few years ago, very few designers or brands.Irishman Jonathan Anderson, chief designer of JW Anderson and Loewe, leads a new generation here.Last week he had Loewe's brand logo sprayed on the roller shutters of windows in Madrid in rainbow colors.His hashtag these days: #Worldpride2017.