The most expensive shoes in the world

shares in this article

View stocks in this article

Tenth place in this ranking starts with a pair of sneakers for an incredible $100,000. According to the FOOTSHOP Blog, this is the Drake Edition of the Air Jordan 12 OVO. The shoes are the result of a collaboration between the brands Jordan and OVO (October's Very Own). The latter belongs to the famous Canadian star rapper Drake, who also gave the edition his name. The special pair of sneakers were originally donated by Drake to a lucky fan for $200 as part of a Toronto Raptors match, according to the FOOTSHOP blog. Apparently, he immediately sold the shoes on eBay and received a record sum of 100,000 US dollars. It is not known whether there is a signature or even a message from the rapper on the shoes.

From one pair of Air Jordan it goes straight to the next in 9th place. What's unique about these Nike Air Jordan 12s, which changed hands for a whopping $104,000, is that they were worn by Michael Jordan himself in the 1997 NBA Finals. The addition "Flu Game" is said to have arisen from the fact that the basketball star was ill at the time of the decisive final and was fighting for the title despite having the flu. For Michael Jordan, the ordeal paid off as he not only won the championship with the Chicago Bulls, but was also crowned NBA Finals MVP. 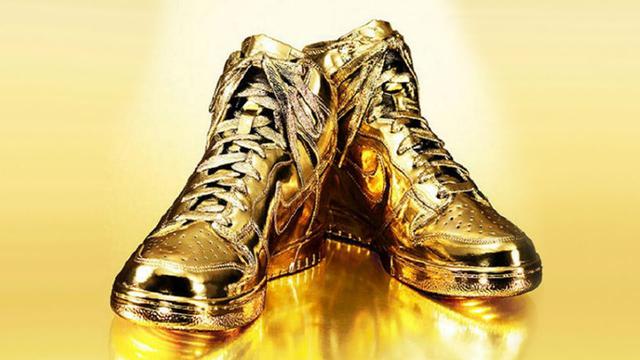 Sneakers continue in eighth place in this ranking. According to COSMOPOLITAN magazine, the shoe of the 100 MM Diamond from the Buscemi brand is decorated with diamonds worth 11.5 carats and gold fittings. So the sneakers live up to their name. Prospective buyers can view the limited-edition model at the Buscemi Store in downtown Manhattan and purchase it for $132,000.

Similar to ninth place, there is also a very specific feature in seventh place that drives the price of the pair of shoes to astronomical heights: It belonged to Michael Jordan and was worn by him while playing basketball. The unique Converse sneakers in question date back to 1984 and were used on the basketball star's feet during the US Olympics. However, this alone does not make the shoes all that unique. The fact that Michael Jordan won the gold medal with them, of course, and then signed them, also ensures that certain something. In addition, according to COSMOPOLITAN, it is said to have been the last pair of Converse sneakers that Michael Jordan wore in competitions, since he signed a deal with Nike after the Olympic Games. In an auction, the historic shoes therefore reached a price of 190,373 US dollars.

Sixth place goes to a pair of shoes that were also used during the Olympic Games. The Nike Moon Shoe was designed by Nike co-founder Bill Bowerman for qualifying for the 1972 Olympics, according to the FOOTSHOP Blog. It is the last remaining pair from this time and therefore unique. In July 2019, the historic sneakers were said to have been auctioned off at Sotheby's by collector Miles Nadal for a price of 437,500 US dollars.

Apparently, if you want a shoe to command a particularly high price, all you have to do is ask Michael Jordan if he could wear it for a short time. Fifth place is a pair of Nike Air Jordans from 1985, which were specially made for the basketball star at the time. According to the fashion magazine Vogue, Michael Jordan is said to have worn them in several games as a rookie with the Chicago Bulls and signed them with a permanent marker. According to Vogue, an unknown person bought the shoes for a staggering $560,000 during a seven-day Sotheby's online auction on May 17, 2020.

3rd place: The Fire Monkey by Bicion and Dan Gamache

There is only one sneaker in the world that is even more expensive than Drake's gold sneaker, and this one takes third place in this ranking. With a blue and white floral pattern consisting of hundreds of diamonds and sapphires made of 18k white gold, designer Dan Gamache's Fire Monkey is said to have a price tag of four million US dollars, according to COSMOPOLITAN. Even the shoelaces are set with diamonds. On top of that, massive gold pendants with the logo of the Bicion label are said to be attached to the eyelets.

The silver medal in this ranking does not go to a sneaker, but to a stylish stiletto. According to an article in COSMOPOLITAN, the stiletto emerged from a collaboration between luxury designer Debbie Wingham and shoe designer Chris Campbell. The threads used should all be made of gold and the leather used should also be coated with gold. In addition, the shoe is adorned with 1,000 gems. The value of the pair of shoes is estimated at 12.7 million euros.

The most expensive shoes in this ranking are the Louis Vuitton Passion Diamond Shoes. According to COSMOPOLITAN, the high heels were made of leather, silk and 238 diamonds. Probably the most expensive pair of shoes in the world can be viewed at the jeweler "Hemant Karamchandani" in the luxury hotel "Burdsch Al Arab" in Dubai. The price is a whopping $17 million.

More news on the subject

Bezos, Jordan and Co.: The most expensive divorces

Top 10: The ten most expensive companies in Germany

The most expensive stocks in the world: When Amazon and Google look cheap