Carbon running shoes are the new silver bullet in running.

Carbon running shoes experienced their first big boom in 2017. At that time, Olympic marathon champion Eliud Kipchoge wanted to be the first person in the world to run a marathon in under two hours on the Monza racetrack. Under conditions that were not record-breaking (changing pacemakers), he just missed this goal with 2:00:25 hours. But his shoes were also the center of attention at the time. The Nike Vaporfly 4%. Because these were equipped with a carbon fiber plate and should help the long-distance runners to new leaps in performance.

What happened next was an incredible boom. In the next few years, world records were broken several times, even though the pandemic prevented many competitions. Within a little more than four years, the best times in road running developed into new spheres.

* for projects that are not suitable for world records

Note: Yehualaw's record was later invalidated because the route was not measured correctly.

In the 10-kilometer road run, there were also huge leaps in performance for the women and men.

Most world records have been improved by almost 2 to even a little more than 3 seconds per kilometer within a few years. That's also the speed advantage predicted by these shoes. This also means that further major leaps in performance are much less likely without additional technological developments. Only among the women was there an outlier, where the world record was even increased by almost 6 seconds per kilometer.

Why do carbon running shoes make you faster?

A stiff carbon plate in the midsole of the running shoe is designed to increase energy return with every step. This leads to an improvement in running economy. That is, the runner can run at a high pace with less energy expenditure.

This technology is said to improve mileage by 2-3 seconds per kilometer.

Which carbon running shoes are there?

Almost all major manufacturers now have at least one carbon model in their range. Here is a brief overview:

Carbon running shoes by Hoka One One

Hoka One One Carbon X 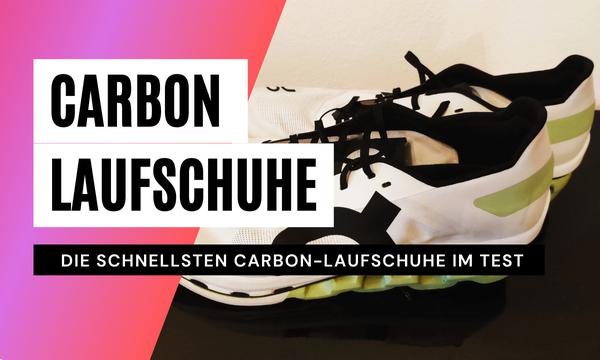 Hoka One One Evo Carbon Rocket

Carbon running shoes from ON

As a result, the running feeling is more natural, but the comfort may be somewhat reduced

Successor to the Asics Metaracer

At 250 euros, it is significantly more expensive than the Metaracer (200 euros)

Go to the Asics Metaspeed Sky

Due to the hard sole, however, it is only suitable for very well-trained runners

Currently the most expensive carbon running shoe at 300 euros

Go to the Nike Air Zoom Alphafly Next%

In contrast to the other carbon shoes, the sole seems more flexible or less stiff

Nevertheless, the running feeling is very direct and natural, even a touch more direct than comparable carbon models

To the ON cloud boom

Use glass fiber instead of carbon

At 200 euros in the lower range of carbon shoes

To the Mizuno Wave Rebellion

By clicking on "Next" you get to the overview of all carbon running shoes: